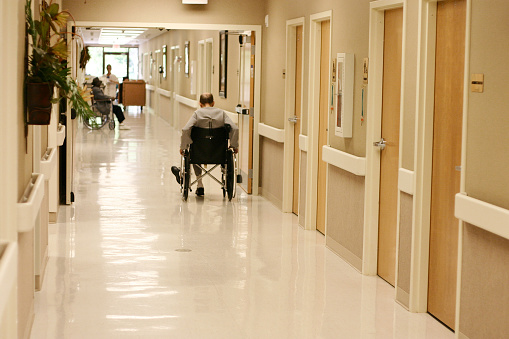 In April 2020, in the early days of the COVID-19 pandemic, police acting on a tip found 17 bodies crowded into a very small morgue at one of the largest nursing homes in New Jersey. It was a horrifying discovery that led to an investigation, fines, and a class action from the family members of residents.

The Andover Subacute II nursing home in Sussex County recorded a total of 83 Covid deaths. The owners of the facility were found not to be in “substantial compliance” and fined $221,115 by the federal government. The attorney general’s office launched an investigation.

But the facility is still in operation, under a new name. Now called Woodland Behavioral and Nursing Center at Andover, it has the same owners – including Louis Schwarz, who helped run Skyline Healthcare. Skyline once owned more than 100 nursing home facilities overseeing the care of more than 7,000 residents.

Accusations of neglect and mismanagement

Beginning in 2017, the chain began to collapse. More than a dozen of its facilities closed. Some ran out of money. Others were shut down over documented neglect – including one instance where regulators found maggots in a resident’s catheter. Fourteen facilities were forced to close permanently, displacing more than 900 residents.

David Grabowski, a professor of health care policy at Harvard Medical School, said the pandemic exposed a lack of resources and regulation in the industry.

“The individuals that ran Skyline should not ever be in charge of a nursing home again, and yet here we are," he said.

“We need to ensure that there aren’t these kind of back doors, that nursing homes aren’t able to simply put a new name on the building and continue to operate as is.”

Louis Schwartz and Chaim Scheinbaum are part owners of at least seven nursing homes, including the former Andover Subacute II. New York health officials recommended against Scheinbaum taking ownership of a nursing home in the state in January 2020. They cited an ongoing investigation and noted they disapproved of his “character and competence.”

Documents show the problems Andover had coping with the pandemic. Staff members repeatedly requested personal protective equipment (PPE) such as masks and gloves. A registered nurse told police about poor management of PPE, a lack of testing, and failure to segregate patients suspected of having Covid.

Sharon Farrell’s brother Stephen died at the Andover facility during the Covid outbreak. She joined the lawsuit with other families and says her goals for the legal action are simple.

“I want these guys out of business,” she said.

When loved ones are the victims of nursing home abuse and neglect, experienced legal representation is needed. The attorneys at Kurle Justus, LLC fight for the rights of nursing home residents in Decatur and throughout Georgia. We build strong cases based on facts and fight to hold negligent nursing homes and assisted living facilities accountable.

Our firm has extensive experience with cases involving abuse or neglect in nursing homes. We have an in-depth knowledge of state and federal laws. Our attorneys have worked with the Office of the State Long-Term Care Ombudsman. We know how to negotiate with insurance companies and fight for our clients in court.

Learn more about how we can help by contacting us to schedule a free case evaluation.